New address of the article here:

https://tefolium.blogspot.com/2020/11/20201106-updated-socialist-countries.html
I will publish long article on my blogspot.

updated 20201105: Adding something about Mangyongdae, Haeju and Sinuiju.

If I could buy the Seungri and Chullima I mentioned here, I will post the picture.

updated 20201106: Pyongsong, Pyongsam and Wonsam are added. Now, we found that there were 8 fountain pen manufacturers (including Sinuiju) in DPRK at least. Something about Hongha in 1967 were added.

updated 20201108: something may relate to DPRK's were added. My friend, Yao, provided a photo.

I will update this article anytime I find something.

By the way, according to Chronicle of Shaanxi Province Vol. 15 Light Indrustry, a fountain pen / ball pen factory for Cuba was cancelled, machines were used to found Xi'an Fountain Pen Factory.

And something about DPRK, Albania, DDR, Romania were collected by Shanghai Archives Hall.

Hongha Stationary Factory now it is called Công ty Cổ phần Văn phòng phẩm Hồng hà, HH for short. According to a protocol made by PRC and DRV in 1956. 7. 26, PRC would help DRV to found its own fountain pen manufacturer. Shanghai Foreign Economic Relations and Trade Annuals said it began building in 1957, the factory was handed over to DRV in 1959. 12, while shqgz said it finish building in 1959.9 and HH said it is found in 1959. 10. 1, the 10th Anniversary of PRC.

The brands of Hongha are TRƯỜNG SON (name of a mountain), HOÀN KIẾM (name of a lake), HỒNG HÀ (name of a river) and TRẠNG NGUYÊN (=Zhuangyuan in Chinese. principal graduate), NÉT HOA (it is for calligraphy), TRƯỜNG SA (under the Vietnamese name of Nansha Islands.) 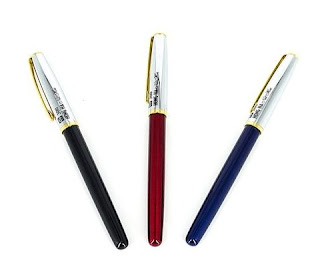 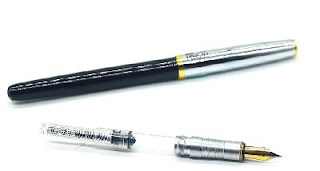 From the Online Store

Now it is a joint stock company.

I posted my collection of Vietnamese pens here. 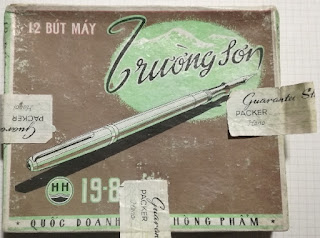 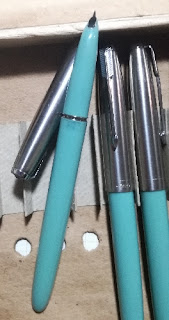 According to Beiheiren' historical calendar, http://www.jca.apc.org/beheiren/nen1967.html, HH was banned for importing to Japan by Tokyo Custom at 1967. 10. 12, because of Parker. Yokohama Custom thought HH' clips infringed Parker's trade mark, the Arrow Clip at 1967. 12. 27, so the temporary import ban applied by Parker was turned down and the import of 300 dozen of HH to Japan by trading company Sanshin Koeki (三進交易) was permitted.

Vietnamese have their own 616 named Hồng hà 72, which have 6 colours, Black, Red, Light Purple, Sky Blue, Grass Green, Lake Blue and its name is in memory of Air Battle of Dien Bien Phu/Operation Linebacker II, according to VOV, https://vov.vn/kinh-te/105-trieu-dong-3-cay-but-may-hong-ha-315541.vov. I think it used molds provided by China. Or It is another oversea steel nib “581” Hero like 616 (small size). 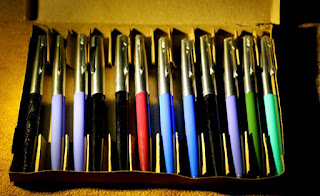 According to an article named How Chinese Craftsmen Aid Foreign Countries, Dang'an Chunqiu, 2020. 5, Zhang Shanbao, a vice director of Wolff's Component Workshop and National Model Worker in 1956, were send to Vietnam to help them in 1959. 4. Vietnamese required that HH should be found in 1 years. The support ended 2 month earlier than plan. Zhang earn Vietnamese Model Worker Medal--Anh hùng Lao động Việt Nam. And Vietnamese can produce twice of the design per annum 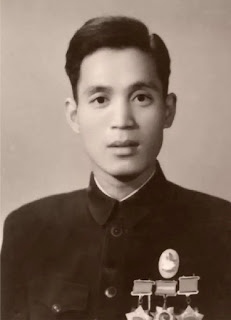 Because Vietnam government turned anti-Chinese and many Chinese who living in SRV became refugee, PRC stopped supporting in 1978. 7. 3.

Its fountain pen brand may be HẠ LONG mentioned in https://vov.vn/xa-hoi/nguoi-suu-tam-but-may-422787.vov. Ngô Việt Dũng, owner of Bút máy Sao Khuê, Hanoi, the main role in the report, is the staff of Handheld, a Vietnamese forum and a former engineer of HH, who is related to TRƯỜNG SA fountain Pen.

Sao Khuê=Kui Xing in Chinese, means the god of examinations, and an associate or servant of the god of literature, Wen Chang.

A document said that fountain pen factory project belonged to Shanghai in 1961. 7. 7.

Zhang Shanbao went to Chongjin in 1961. 6 and he earned Chollima medal of DPRK.

Another document in MOFA of China said that DPRK wanted to cancel 4 factories including fountain pen factory in 1963. 6. 13. 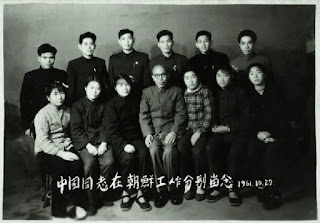 South Korea's Korea Institute for Industrial Economics and Trade (KIET) published an report in 2014 https://www.e-ia.co.kr/sonosa/newsletter/201412/p2.pdf, there were 4 fountain pen factories in DPRK and one named Chongjin Fountain Pen Factory in Chongjin.

According to a Chullima fountain pen sold on ebay, Chullima/Chollima belongs to Chongjin.  조선청진 (朝鮮清津) on the guard means Chongjin, Korea.

It is possibility that it is named after Zhang's Chollima medal.

According to KIET, there is a factory name Sinuiju Disabled Soldier Stationary Factory in Sinuiju.

A University of Liaoning's student thesis named How light industry, textile industry and electronics industry develop during adjustment in Dandong by Wang Qiuke, who graduated in 1981 said that the Responsible Secretary of the North Pyongan Province Party Committee of the Workers' Party of Korea asked Dandong Fountain Pen Factory (Golden Dragon) for drawing of a machine invented in 1979 when his visit in Liaoning.

In the year 1979 according to Renmin Ribao. I do not find any visiting from North Pyongan Province in 1980 in news or chronicle. The Responsible Secretary was Kim Pyong-ryul 김병률,  who was President of the Supreme Court of North Korea between 1998-2014 (he died in 2013)

Dandong Fountain  Factory was named Dandong Sino-Korea Friendship Fountain Pen Factory in Chinese and Korean ,1983. I do not know whether it was related to providing drawing of the machine.

The only fountain pen factory in Pyongyang is Mangyongdae Disabled Soldiers’ Fountain-pen Factory refer to KIET.

Mangyongdae and Pyongyang are its products. Seungri/Sungri is made in Pyongyang, so does it.

According to 2019 Directory of Northern Institutions (2019 북한 기관별 인명록) by South Korea's Ministry of Unification, the secretary of the Party committee is  Park Jong-kyu, manager is Lee Ki-chan, Chief Engineer is Lee Hyuk.

You can see 조선청진 (Chongjin, Korea) on the guard.

The sac-based filling looks like a Golden Star for exporting to Japan. 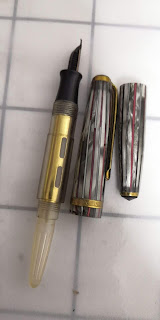 Golden Star for exporting to Japan
From Yao

The Japanese Blog shows Mangyongdae and Chollima with Youtube video.

They are "Triangle Nib" in China or "Roof Nib" in Japan.

Other factories without Chinese support

The secretary of the Party committee in Haeju Disabled Soldiers’ Fountain-pen Factory is  Kim Duk-su according to 2019 Directory of Northern Institutions (2019 북한 기관별 인명록) by South Korea's Ministry of Unification.

At the beginning, in 1934, Omega Fountain Pen Factory was found by M. Szaja and A. A. Wrocławski.

In 1949, the factory was nationalized.

In 1951. 1. 1, Omega combined with some other paper product factories to found CZMB.

In 1960s, PRL decided to create Poland Fountain Pen, so Częstochowa was chosed. Plastic engineer Józef Koszkul (now, we should call him Prof. Józef Koszkul) became the person in charge. Even though Chinese provide machines, the nibs of “Polish Parker” were developed by Józef Koszkul, Eugeniusz Helm and Jan Frymus. They formally produce fountain pen in 1965. They got a patent about nib slitting by using softer metal in 1967. 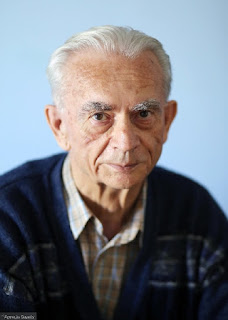 Józef Koszkul said that Chinese did not provide introduce of the machines, and they often needed to be repaired. The first model  fountain pen after PRL bought Chinese were produced in 1965 basing on Chinese model. There were popular with nice quality.

However, Józef Koszkul bought 1kg of GOLD from Mint of Poland to try producing GOLD nib but failed. "Precious metal is too soft." So CZMB decided to use stainless to produce nib.

After privatization, CZMB belonged to many company including Monami from South Korea. Now it belongs to Astra, a Polish company. The former workers made an protocol with Astra to produce Zenith fountain pen in some room of former CZMB.

https://www.szukajwarchiwach.gov.pl/en/zespol/-/zespol/75198, said that in 1947, Omega Fountain Pen Factory belonged to Rozenwajg, the tenant.

Wyborcza provides photos of some of CZMB products. 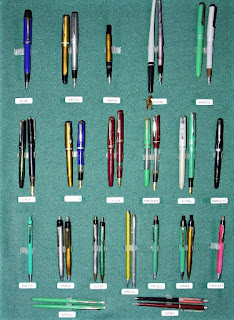 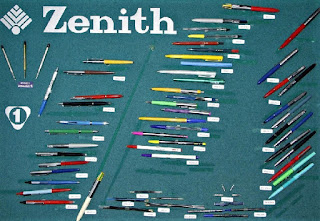 Zenith-2 is Model 581 with a different stainless jewels and Late Model 215 style double pressure bar guard. It is early version which is with arrow clip.

The interview with Józef Koszkul by Wyborcza made a mistake that China did not get Parker factory in China or drawing till 1979, Parker and Hero wanted to cooperate on Parker 45 and years ago Lishui bought machines and molds from Parker's Dongguan Factory in rumor. There was a document about the investigation about production in Częstochowa and project settlement in 1964. And Chinese accepted Polish trainees in 1965.

There was pen store named Parker (Fountain Pen) Company in Shanghai own by Niu Yongji钮永集, who founded Life永生 in Parker Company's North Szechwan Road Branch, Shanghai, 1948. Life changed its latinization from English word “Life” to Cantonese “Wingsung” in 1956 after it was mergered by Xinhua. Because there was another brand named Life from Japan on market in southeast Asia. Xinhua changed its named into Wingsung in 1980s. 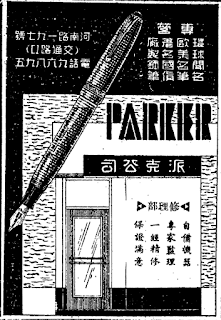 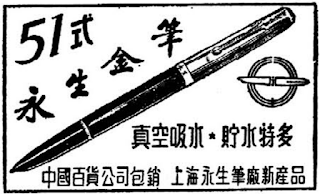 Watson, another fountain pen maker, was said that it was founded by Gwok Pui Gei(郭培基), who was the former director of DODGE & SEYMOUR (CHINA), LIMITED's Parker Department and was said learned fountain pen repairing from George Safford Parker. The first Chinese hooded nib fountain pen was made by Diamond Fountain Pen Factory in 1944, whose consultant is Gwok Pui Gei 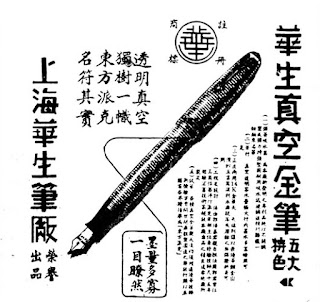 "......4th, Engineering and design were made by Gwok Pui Gei, the former director of DODGE & SEYMOUR (CHINA), LIMITED's Parker Department ......" 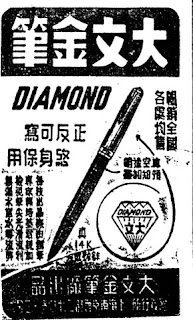 "Products were checked by the Fountain Pen Specialist Gwok Pui Kei himself. Written smoothly without any disadvantage about Ink leaking "

A document said that Shanghai Pen & Plastic Company, the administrator of pen and plastic factories in Shanghai took part in aiding Albania. I do not know whether there was pen factory aided by China in Albania or not.

China also planned to support Cuba in 1963. However, according to Chronicle of Shaanxi Province Vol. 15 Light Industry, Light Industry Department decide to hand the machines over Shaanxi Province, and Xi'an agreed to found Local-Administered State-owned Xi'an Fountain Pen Factory in 1966.

From 1986, cooperating with Hero to produce Hero 258 and Hero 611. Nibs and feeds were provided by Hero.

Romania send investigation group about fountain pen to China in 1959-1960.

Wang YX, A few work for improving quality in fountain pen industry, Chinese Light Industry, 1956, 15: 9-11 said in the National Fountain Pen Industry Professional Conference, 1956, the first one was that Soviet accordion sac should be promoted. It had been tested and it could increase ink capacity to 1.4-1.8 cc.